At fourteen, she left home for good.
No one that young should feel that old;
She quickly found, and understood,
The world shows heat but hearts run cold

When you have nothing much to give.
‘Neath broken roofs and walls with cracks,
She did her best to work and live
Out past the bridge and old lost tracks.

At seventeen, she met a man
Who said he’d love her and provide;
She entered into bedded bliss
But it was not as advertised,

Instead, it was a different hell,
A different way to be alone.
She sickened from the sight, the smell,
The two lost tracks and bridge of stone.

At nineteen, she gave up for real.
I wish this story happy was,
But truth is like a medicine:
The worse it tastes, the more it does.

So every time you pass the tracks
Just think, for all that’s true and good,
About the innocence we lose
With each abandoned 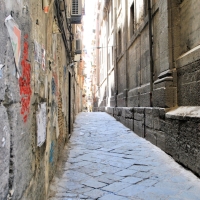